Trump blocks cryptocurrency transactions from Venezuela in the US

President Donald Trump issued an executive order Monday banning any transactions within the United States involving any digital currency issued by, for, or on behalf of the Government of Venezuela.

The order applies to U.S. citizens as well as anyone within the United States, and includes cryptocurrency issued on or after January 9.

President Trump’s order is in response to recent attempts by Venezuelan President Nicolas Maduro‘s regime to “circumvent U.S. sanctions by issuing a digital currency,” the White House said in a statement.

Venezuela launched its oil-backed cryptocurrency in February to help pull the country out of a continuing economic crisis. President Maduro said each petro token will be backed by one barrel of the state’s national petroleum. Maduro also said roughly 100 million tokens would be issued — estimated to be worth around $6 billion.

Bitcoin prices dropped about $200 to around $8,388, according to Coinbase, following the order. 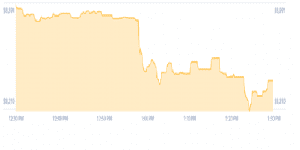 This is the latest move by the Trump administration to restrict the Maduro regime’s access to capital.

President Trump signed an executive order in August to impose financial sanctions against Venezuela. Treasury Secretary Steven Mnuchin told reporters at a news briefing following the announcement that Venezula “can no longer take advantage of the American financial system to facilitate the wholesale looting of the Venezuelan economy at the expense of the Venezuelan people.”

The U.S. president has also said he would not rule out a “military option” in Venezuela as the Maduro regime consolidates power.

“We have many options for Venezuela, including a possible military option, if necessary,” Trump told reporters in August.

Cryptocurrencies have come under scrutiny by the U.S. Treasury Department for their potential for nefarious uses.

“My No. 1 focus on cryptocurrencies, whether that be digital currencies or bitcoin or other things, is that we want to make sure that they’re not used for illicit activities,” Treasury Secretary Steven Mnuchin told CNBCin January. “So in the U.S., our regulations [state that] if you’re a bitcoin wallet, you’re subject to the same regulations as a bank.”

The Trump administration said in December that North Korea was behind the WannaCry hack earlier this year, demanding ransom in bitcoin, adding to concerns that the country could use cryptocurrency to fund future attacks.

I, DONALD J. TRUMP, President of the United States of America, in order to take additional steps with respect to the national emergency declared in Executive Order 13692 of March 8, 2015, and relied upon for additional steps taken in Executive Order 13808 of August 24, 2017, and in light of recent actions taken by the Maduro regime to attempt to circumvent U.S. sanctions by issuing a digital currency in a process that Venezuela’s democratically elected National Assembly has denounced as unlawful, hereby order as follows:

Section 1.
(a) All transactions related to, provision of financing for, and other dealings in, by a United States person or within the United States, any digital currency, digital coin, or digital token, that was issued by, for, or on behalf of the Government of Venezuela on or after January 9, 2018, are prohibited as of the effective date of this order.
(b) The prohibitions in subsection (a) of this section apply except to the extent provided by statutes, or in regulations, orders, directives, or licenses that may be issued pursuant to this order, and notwithstanding any contract entered into or any license or permit granted before the effective date of this order.

Sec. 3. For the purposes of this order:
(a) the term “person” means an individual or entity;
(b) the term “entity” means a partnership, association, trust, joint venture, corporation, group, subgroup, or other organization;
(c) the term “United States person” means any United States citizen, permanent resident alien, entity organized under the laws of the United States or any jurisdiction within the United States (including foreign branches of such entities), or any person within the United States; and
(d) the term “Government of Venezuela” means the Government of Venezuela, any political subdivision, agency, or instrumentality thereof, including the Central Bank of Venezuela and Petroleos de Venezuela, S.A. (PdVSA), and any person owned or controlled by, or acting for or on behalf of, the Government of Venezuela.
Sec. 4. The Secretary of the Treasury, in consultation with the Secretary of State, is hereby authorized to take such actions, including promulgating rules and regulations, and to employ all powers granted to the President by IEEPA as may be necessary to implement this order. The Secretary of the Treasury may, consistent with applicable law, redelegate any of these functions to other officers and executive departments and agencies of the United States Government. All agencies of the United States Government shall take all appropriate measures within their authority to carry out the provisions of this order.
Sec. 5. For those persons whose property and interests in property are affected by this order who might have a constitutional presence in the United States, I find that because of the ability to transfer funds or other assets instantaneously, prior notice to such persons of measures taken pursuant to this order would render those measures ineffectual. I therefore determine that for these measures to be effective in addressing the national emergency declared in Executive Order 13692, there need be no prior notice given for implementation of this order.
Sec. 6. This order is not intended to, and does not, create any right or benefit, substantive or procedural, enforceable at law or in equity by any party against the United States, its departments, agencies, or entities, its officers, employees, or agents, or any other person.
Sec. 7. This order is effective at 12:15 p.m. eastern daylight time on March 19, 2018.