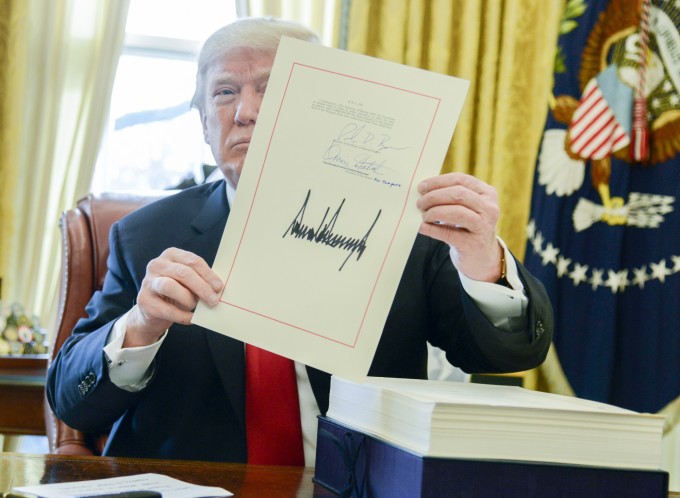 There’s nothing like $1.5 trillion in tax cuts to help make friends at a gathering of conservative political donors.

Donald Trump is gaining ground with members of the Koch political network, after the president’s name was hardly mentioned when the deep-pocketed individuals last assembled seven months ago.

At that time, the group was skeptical of the former New York real estate developer’s conservative bona fides and some of his policy positions. But then came the tax bill, passed by Congress in December and signed into law by Trump just before year-end.

At this weekend’s gathering of Koch donors at a desert resort in southern California, Trump’s stock, like the U.S. market, was up, even if members of the libertarian-leaning group remain nervous about his restrictive views on trade and immigration.

The network founded by billionaires Charles and David Koch didn’t support Trump’s insurgent 2016 campaign, which knocked off more than a dozen more mainstream Republican candidates in the primary before upsetting Democrat Hillary Clinton. Now, it’s grudgingly accepting him and celebrating his first-year accomplishments in cutting taxes and reducing federal regulations.

“I did not support candidate Trump during 2016. I was also very critical of him,” said Art Pope, a Koch donor from North Carolina. “Since he has become president and worked with the Republican Congress, I think the policies his administration has enacted, the policies they’ve enacted with the Congress, have really benefited the American people.”

The Koch network hopes the warming of relations will give it an entree to the White House that will allow it to help shape key policy decisions this year on immigration, infrastructure and trade.

“If you just tuned out Trump and his voice and persona, the policies and achievements have been excellent,” said John DeBlasio, a managing director for a private equity firm in Chicago who was among the 550 donors and potential donors gathered at a three-day summit near Palm Springs.

The relationship between the president and the most powerful conservative organization in the U.S. outside of the Republican Party has long been an awkward one. Before the election, Charles Koch compared a contest between Trump and Clinton to a choice between “cancer or a heart attack.”

Even as some donors and Koch officials praised Trump for passage of the tax bill, Charles Koch, 82, made no mention of him when he welcomed donors Saturday evening or when he appeared on a panel discussion that reporters were allowed to monitor on Sunday.

With more than 700 donors who give a minimum of $100,000 per year and more than 100,000 donors overall, the network has convened similar gatherings twice annually since 2003. Throughout the weekend, reporters were prohibited from approaching donors, except during a hour-long window Sunday evening when a small group agreed to interviews.

“I think he has been successful,” Tom Willis, a Koch donor who runs a renewable energy company and farms in southwest Kansas, said of Trump. “In terms of the policies and the things he’s done, he’s been very pro-business.”

The Koch universe does have White House allies, even if Trump isn’t at the top of the list. Vice President Mike Pence is a longtime friend and Marc Short, the director of legislative affairs, is a former top Koch organization official.

The network used the weekend to reinforce its commitment to help Republicans keep control of Congress and statehouses nationwide. Leaders said plans call for spending close to $400 million on policy and politics during the two-year election cycle that culminates with November’s midterm elections, a roughly 60 percent increase over 2015-16. The previous pledge had been $300 million to $400.

The spending will include about $20 million in 2018 to sell voters on the merits of the new tax law, about the same amount Koch-affiliated groups spent in 2017 promoting the legislation as it was being developed and debated.

“Support is clearly growing for it,” Tim Phillips, president of the Koch-affiliated advocacy group, Americans for Prosperity, told donors Sunday. “We’ve got to make sure that folks are connecting the economic good they’re feeling and seeing with this tax reform that was passed.”

Phillips told reporters the 2018 spending would be the “largest investment we’ve ever had in a midterm election.” The money will be spread across a network that has a presence in more than 30 states and a voter-turnout operation that rivals that of the Republican Party.

Some watchdog groups have pointed out that Koch Industries, one of the nation’s largest private corporations, with interests ranging from oil and ranching to farming and manufacturing, stands to benefit in a big way from changes in the tax law. Americans for Tax Fairness, a left-leaning advocacy group, released a rough estimate last week that said the changes could be worth $1 billion or more a year in reduced taxes for the conglomerate.

Koch officials pushed back against the study. “The report should be met with skepticism,” said David Dziok, a Koch corporate spokesman. “Its methodology is questionable, and the group responsible for it makes no secret of its political leanings. Koch is a strong proponent of comprehensive tax reform because we’re confident that it’ll lead to stronger economic growth, more jobs, and more money in the pockets of American families.”

In a sign of further muscle-flexing, Americans for Prosperity announced a new initiative Sunday to mobilize conservatives for the next Supreme Court vacancy and to push for faster confirmation of judges to lower courts. To help with that, the organization will appoint a “vice president for judicial strategy.”